This is the time of year when I cannot seem to get my fill of fresh tomatoes.  I place thinly cut slices on my morning toast adding just a touch of salt.  For lunch, I layer thicker slices on my bread with pickles, and a bit of mayo and horseradish.  For dinner, I dice them and add them to my pasta with olive oil, garlic, salt and pepper, and fresh basil.   This becomes my almost daily 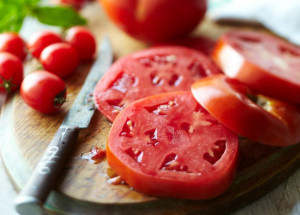 routine every August, but I know this moment is fleeting.  Soon my garden and other local sources of freshly grown and heirloom varieties will be depleted.  All that will be left are the hard, flavorless supermarket tomatoes that I refuse to eat leaving me craving the delectable tomatoes of summer.

The tomato, Solanum lycopersicum L. in the Solanacae family, was not always craved; in fact it was something that was once universally avoided.  This is because so many members of the Solanaceae  or nightshade family are very poisonous, and the tomato was assumed to be so as well. This is reflected in its original scientific first name or genus, Lycopersicon, which translates as “Wolf Peach” inferring that it was something dangerous to eat.  But we now know that although the plant’s leaves contain toxic compounds to protect it from insect and pathogen damage, the tomato is anything but poisonous.  Statesman/horticulturist Robert Gibbon Johnson of Salem, NJ was one of the first to make this case to the public back in 1820 when he vowed to eat tomatoes on the courthouse steps.  According to Salem County Historical Society as he lifted the tomato to his mouth he said “To help dispel the tall tales, the fantastic fables that you have been hearing … and to prove to you that it is not poisonous I am going to eat one right now”.  As the crowd watched in angst, he took a bite.  He lived.  The crowd cheered! The acceptance of the tomato as good food began to spread.  This was also helped by Thomas Jefferson who planted them in his own garden.  By 1897 Joseph Campbell had begun to can them as tomato soup.

A common misconception is that the tomato comes from Italy known for its red sauces and pizza, but this aspect of Italian cuisine developed in more recent history. The tomato actually originated or is native to South America evolving over time from a plant referred to as “pimp” or Solanum pimpinellifolium.  This wild tomato with its pea size fruits is the genetic

ancestor of the tomatoes that we eat today.   The early tomato spread throughout south and central America changing along the way as human’s and the environment selected for different characteristics.  It was first developed as a crop by the Nahua in Mexico around 500 BCE where they referred to it as Tomatl.  Spanish conquistadors brought it back to Europe in the late 14 and 1500s where it then spread throughout Europe.  In contrast to its unsavory name, Wolf Peach, the French came to call it ‘pomme d’amour’ or love apple, a name I much prefer.  Some say this name came from its presumed aphrodisiac qualities.  Others have suggested that the tomato so enriched the nutrition of the European diet they experienced increased energy thereby inciting amorous behavior.

Whether a tomato is a fruit or vegetable is often debated.  A fruit is defined as seed-bearing structure that develops from the ovary of a flowering plant.  Vegetables are all other edible plant parts including roots, leaves and stems. So from a botanical perspective, the tomato is clearly a fruit; in fact it is technically a berry.  We are all familiar with its seeds while the “meat” of the tomato is actually the ovary wall.  However, the decision on how to classify the tomato has not always considered the perspective of botanists especially in the world of politics.  In 1893 this debate made it all the way to the Supreme Court in consideration of the Tariff Act of 1883 that placed a duty or tax on all fresh vegetables.  Those schooled in botany new quite rightly that the tomato as a fruit should be exempt from this tax.  However, the Supreme Court ruled differently as Justice Horace gray speaking for the entire court stated that “…despite what botanists say, tomatoes are vegetables because they are not eaten for dessert and should therefore be taxed.”   In 1981, the same issue made it to the presidential level when Ronald Reagan proclaimed that ketchup, because it was made from tomatoes, was a vegetable and should be counted as such when assessing the nutrition of school lunches.  This slight against the botanists and the children that relied on school lunches for nourishment would provide the US government $1 billion in annual savings in the costs for subsidized meals for students from low-income families because it eliminated the need to add actual vegetables.

There is a rich folklore associated with tomatoes.  They came to represent the sanctity of the home as freshly jarred tomatoes would be placed on fireplace hearths for good luck.  The tomato-like pin cushion that many of us remember from our childhood was similarly a good luck charm. Another cultural tradition involving the tomato is the festival called La Tomatina that is held in the Valencian town of Buñol, Spain. Each year thousands assemble in the streets there to engage in what is referred to as the world’s largest food fight.  There they throw more than 100 metric tons of over-ripe tomatoes at each other filling the streets with pureed tomato.  Attending this event has made it on to my bucket list.

Today, tomatoes comprise a $4.2 billion dollar industry.  Americans consume about 80 pounds a year.  This represents the greatest contribution of vitamins to our diet.  However, only 18 of those 80 pounds are fresh tomatoes.  The majority of what we consume is in the form of processed foods such as sauces, soups, stews, and yes…ketchup.  The tomato is also the #1 home grown crop.  There are hundreds of colors and sizes.  Today, many of these are heirloom varieties that are grown from seeds that have been passed down for generations.  They are a return to the past offering us unique and intense flavors and sizes with tender flesh and skin. The names of these varieties such as Black Krim, Caspian Pink, Brandywine, Green Tiger, and Homley Homer are as diverse as the color and form of the tomatoes themselves.  Most importantly they spare us from those tasteless, tough skinned supermarket tomatoes.

What is with those supermarket tomatoes?  They are tough and tasteless even in the summer.  This is because these tomatoes come from large-scale producers that use varieties that are bred to withstand mechanical harvesting and transportation.  They are often picked, stored, and transported in an unripened state, and then gassed with ethylene, the very same ripening compound that plants use, to initiate the ripening process.  Most supermarkets have to maintain year-long contracts with these large scale growers; that is why we still get these plastic-like tomatoes in the summer.  I say, don’t eat them!  Buy fresh from local producers or grow your own.  You can also eat your Pomme d’amours like I do, only in the summer and as much as you can until they are gone.

[all images from Creative Commons unless otherwise noted]