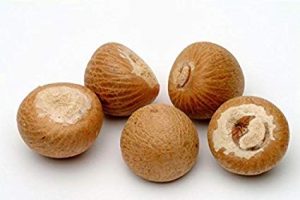 Whenever I visited India as a child, I would always make sure that I was a fast eater. It’s not that I enjoyed the meal so much that I would practically inhale it. It was with what came after the meal that I was more concerned. Paan. I’ve never really thought about what exactly was in Paan that made it so delicious, so my curiosity took over. As I researched the contents of Paan, I found the Areca Nut and what I discovered was a little unnerving. I discovered that a snack that was an integral part of my culture was contains addictive and potentially harmful alkaloids.

Paan is not really qualified as a food. It’s a conglomeration of sweetness wrapped in a leaf that is used as a “mouth freshener” in South Asian culture. It’s similar to that after meal mint people receive at restaurants. Paan cancontain several ingredients in it and goes by different 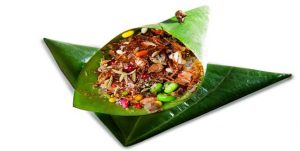 names depending on the geographic region. These ingredients include coconut powder, sweetened rose petals, cloves, fennel, and sugar (Times of India 2018). In fact, Paan itself is such a diverse entity and has several other names associated with it. Not only is it consumed in India, but it is also consumed in China, Taiwan, Philippines and more.

The Areca Nut is mistakenly called the “betel nut” and is taxonomically known as Areca catechu L. from the Arecaceae family. A common misconception is calling this nut the “betel nut”, because oftentimes this nut is consumed with the “betel leaf” as is the case in Paan (Garg, Chaturvedi and Gupta). The Areca nut and the betel leaf come from different plants and families. This nut is found in the tropical areas of Asia, the Pacific and parts of East Africa (Garg, Chaturvedi and Gupta 2014). India, specifically, is the largest producer and consumer of this nut (Hedge and Deal 2014). Trees 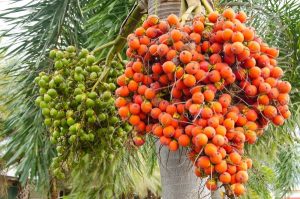 typically grow best in well-drained soils with sufficient rainfall and temperatures ranging from 10-40 degrees Celsius (Agrifarming). The Areca nut is actually a “drupe”, similar to other stony endocarp carrying fruits like peaches, apricots and cherries (Mozek 2017). The mature fruit resembles a mango in its size and shape (Mozek 2017).

The Areca Nut’s cultural origin is hard to pinpoint, but there are several examples in history about when its use started. It has been used since around 3,000 B.C in the Philippines when a skeleton was found with betel nut stained teeth (Malik, Chowdhury and Chauhan 2002). Chewing the nut as it mixes with saliva produces a red dye that stains the teeth. The use of this nut has been mentioned in Sanskrit medical writings dating to the 1st century A.D. This nut has several uses including as a digestive aid, an expectorant and an astringent (Times of India 2018). Culturally, the areca nut is typically offered with two betel leaves on auspicious occasions, like weddings, to symbolize loyalty and the presence of a strong bond (Bajaj 2018).

Despite it’s benefits, this nut is actually the source of addiction in parts of Asia. It’s contains certain alkaloid properties allowing the chewer to get a slight buzz or warming sensation, similar to the effects of smoking a cigarette or drinking coffee (Iverson 2017). The active molecule, arecoline, acts on 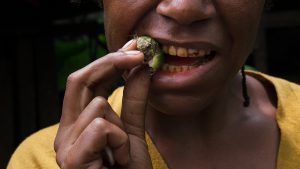 nicotinic receptors, to produce stimulating effects on the nervous system. The user experiences feelings of euphoria. The nut’s addictive property is not the only harmful effect. The nut has been linked to all types of cancers like throat, laryngeal and esophageal cancers (Russo 2017). The nut itself contains a lot of carcinogens and when coupled with tobacco can lead to a variety of health issues, including tooth decay (Russo 2017). The nut can also contain teratogenic properties that can harm the development of a fetus if chewed during pregnancy (Russo 2017).

Addiction to the Areca nut is still rampant in areas of Asia. As far as my knowledge goes, no laws or rules have been passed surrounding the selling of the Areca Nut in Paan, which is probably why this is the fourth highest addictive substance in the world currently (Bowers 2016). In the US specifically, the FDA classifies the Areca Nut on the Poisonous Plants Database (Bowers 2016). More health organizations need to increase the awareness about the risks of betel nut chewing, since it seems that not a lot of people know about its carcinogenic properties. Who knew that something that can taste so good could be so deadly!